The word Pharaoh means king and it was a title of the ancient rulers who was considered to be the son of the god or the representative of the god on earth. The Pharaoh was the political and the religious ruler of the country.

Facts about the king Ramses IV

Ramses IV was the fifth son of the king Ramses III from his wife Isis, possibly was of Asiatic origins and she had her tomb in the valley of the queens QV 51.

Ramses IV ruled for 6 years only between 1151 till 1145 BCE but he was his father co-ruler in his last few years on the throne. More precisely he started to be crown prince in the twenty- third of his father reign Ramses III.

We will talk later in details about his tomb KV2 in the valley of the kings which is considered one of the most beautiful tombs in there and his sarcophagus is a very nice red granite one. 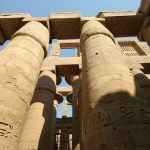